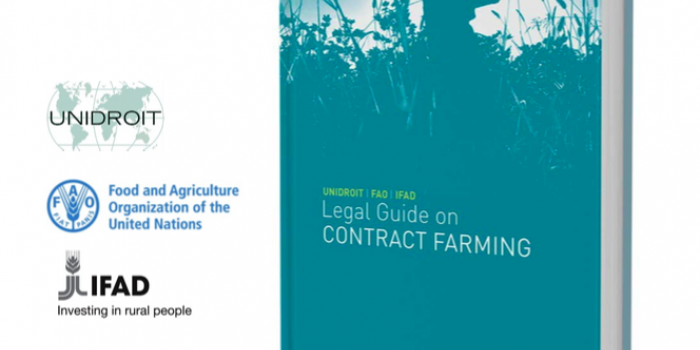 Which is the legal framework for agricultural production contracts? Are there some important rules that parties have to know about how contracts are negotiated and formed, as well as the key elements of the contract? Where are fixed the most relevant obligations bearing upon the producer and the contractor? And then, arises the question on determining the consequences of a failure by the producer or contractor to abide by the terms of the contract? How can we explore excuses for non-performance (such as force-majeure) and haw can we have any awareness of remedies for breach of contract? Is there an overview out contract’s duration, termination and renewal? What are the mechanisms for dispute resolution in the context of agricultural production contracts? These and other questions the 'Legal Guide on Contract Farming' offers a response, for entrepreneurs, for stakeholders and for legal advisor of all nations.

The Guide intends to serve as a “good practice” reference by providing guidance for parties engaged in contract farming operations throughout the whole life of the contract, from negotiation until termination, thus helping to build trust between the parties and support mutually beneficial relationships. The Guide may also serve as a reference in the context of the formulation of public governance instruments to sustain agricultural development, and provide an additional tool available to international organisations and bilateral cooperation agencies as well as nongovernmental organisations engaged in strategies and programs in support of contract farming in developing countries.

Contract farming arrangements reflect multiple commercial practices and their success depends on many elements. One key element is the capacity of the parties to build stable, commercially sound and fair relationships, based on clear commitments and mutual compliance.

In this respect, the legal framework is essential to give legal effect to parties’ stipulations and to supplement them as the case may be. This is all the more important in view of the imbalance of economic power between the parties that generally characterises agricultural contracts. Depending on each legal system, legal provisions may apply mandatorily to certain aspects of the contractual relationship, excluding the parties’ ability to derogate from such legal provisions. Understanding the interplay between the terms and practical implementation of the contract and the applicable legal provisions, including the default rules, increases the security of the parties by making them aware of possible critical issues regarding their rights and remedies throughout the life of the contract.