INTERNATIONAL TRADE - "2016.11.22 - President of Italian Republic, Mr. Mattarella, meets Chief of Vietnam at Quirinale Palace: among us a concrete and growing partnership". 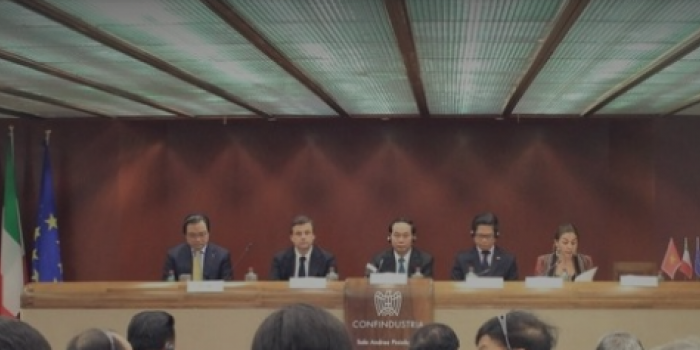 This is the Ansa videoclip on the institutional visit in Italy of the President of the Socialist Republic of Vietnam, Mr. Tran Dai Quang, received at the Quirinale and the following day (23.11.2016) at Palazzo Chigi, by the Italian Prime Minister, Matteo Renzi. The aim of the vision was to strengthen political and economic relations between the two countries, with the signing of protocols to facilitate cross-border trade relations both in export and import. The "Doing business in Vietnam" will become even cheaper.

Mr. Tran Dai Quang, 59, was elector (with 436 yes, of 465 voting members) from the Vietnamese Assembly on 2016.04.02 and previously occupied the delicate position of Minister of Public Security and General Police. In Vietnam, the president is the head of state and commander-in-chief of the armed forces and in a televised speech assured his nation that he wanted to pursue "with determination and perseverance the struggle to firmly defend the independence of the country, the Sovereignty, territorial integrity, interests and national security. " On March 31, 2016, however, was elected for the first time in VietNam by a woman of parliamentary speaker: Mr. Nguyen Thi Kim Ngan (61, who obtained 95.5% consensus from the National Assembly) is A former financial director of the Ben Tre province, in the Mekong Delta, and thus a profound knowledge of the economic reality of Asian and world markets.